Ronald Greer's biography of Roberta Martin, "Only a Look", now available for purchase 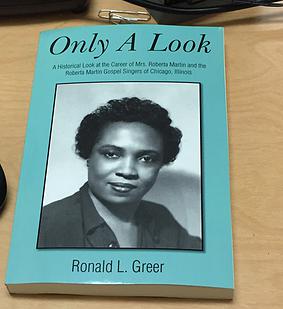 First of all, hi everyone! I know it's been a while, but I'm still around. I have negelcted to post anything here for nearly two years, so this post hopefully will make up for that.

Back in August 2010, I published a post about a book in the works about the Roberta Martin Singers by Ronald Greer of Bay City, TX. Since that time, I have been anxiously awaiting the publication of Mr. Greer's book. Over the past five years, I've conversed with Mr. Greer regularly, and he can attest that my most commonly asked question was "how's the book coming along?" or some variant of that question.  The wait finally ended in September 2015 when his book was finally published. Only a Look: A Historical Look at the Career of Mrs. Roberta Martin and the Roberta Martin Singers of Chicago, Illinois tells the story of Roberta Martin and her aggregation of singers from her humble beginnings in Helena, Arkansas, to the formation of her famous singing group, her passing in Chicago, and even touches briefly upon the surviving members in the present day.

Only a Look tells the story of Roberta Martin in such a way that you feel as if you're sitting down with Mr. Greer as he relates the story of Roberta Martin's life. Given Mr. Greer's young age, you may wonder how he was able to attain so such information about Roberta Martin. From 1976 to 2009, Mr. Greer spoke to Eugene Smith of the Roberta Martin Singers on a nearly daily basis. Smith was a treasure trove of information for Mr. Greer. He had the longest tenure with the group (1934-1970) and was there from nearly the beginning to the very end. Mr. Greer also interviewed other long time members of the Roberta Martin Singers prior to their passing such as Little Lucy Smith Collier and Bessie Folk, providing even more insight about the group.

Perhaps the most incredible thing about Only a Look is the rare photographs provided by Roberta Martin's son, Leonard "Sonny" Austin. Until now, the public's view of Roberta Martin has been limited to a coupe of PR shots taken from the 1940s through the 1960s for various record labels. Austin's family photographs, which are being publicly shown for the first time in Only a Look, show Roberta Martin not just as a singer, but as a mother, a wife, a friend, a community leader, and a businesswoman, and are sure to delight any music historian who knows the name Roberta Martin.

You can purchase your copy of Only a Look from Mr. Greer at the following link: Only a Look

In the coming months, Mr. Greer plans to host book signings and conference appearances to further
promote the book.
Posted by JM at 10/16/2015 02:38:00 PM 0 comments