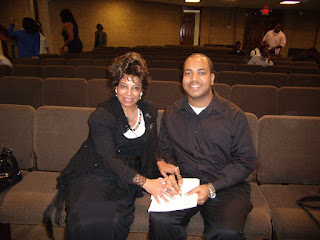 In August, I learned that I would be singing in the Praise Ensemble at my church with the legendary Sarah Jordan Powell. Mrs. Powell was born in Houston and sang with the Sallie Martin Singers in the 1960s. Personally, I believed it would be an honor just to see Mrs. Powell sing, but to actually get to sing onstage with her and then to interview her was just outstanding! The icing on the cake was that we sang an old school hit with her, none other than the late Eugene Smith's landmark song "I Know the Lord Will Make a Way." Talk about Golden Era goodness all over! I asked Mrs. Powell a few questions after service and this is what I learned.

When did you start professionally singing gospel music?

Professionally, I began singing gospel music in 1971 at the Gospel Music Workshop of America Convention (GMWA) in Dallas, TX after meeting Rev. James Cleveland. Before that, I mostly sang around different churches.

You sang with the Sallie Martin Singers during the 1960s, singing with legends like Bessie Folk, Shirley Bell, and of course Sallie Martin. How did you meet Sallie Martin and become a member of the group?

I was teacher in Chicago at the time at Englewood High School, and singing in the Chicago area, and I was recommended to Sallie Martin. At the time, she was looking for a vocalist to add to her group. She called me and invited me over to her home. We talked for a bit, and I sang for her and that's how I joined the Sallie Martin Singers.

How long did you sing with the Sallie Martin Singers?

I was with her for just a few years. I toured with her during the summer when I wasn't working at school.

Are the stories about Sallie's personality true?

Well, she did speak her mind. I believe that God uses many people and that you have to adjust to others. My father was a pastor and he told me that as long as I was academically smart, and spiritual, that I would be able to adjust to different people. It helped. I adjusted to Sallie Martin and we never had a cross word toward each other. We got along with each other.

What path did you take after you left the Sallie Martin Singers?

After I left the Sallie Martin Singers, I joined the Voices of Melody of Chicago, IL, led by Dr. Charles Clency. After that, I met James Cleveland and he produced my first 3 solo albums.

You come from an era of great gospel sopranos such as Delois Barrett Campbell, Marion Williams, Little Lucy Smith Collier and Delores Washington. Do you have any particular singers who influenced your style?

I'm sure you've met a lot of singers in your travels and shared the stage with many notables. Which of these artists particularly stand out?

Besides working with Sallie Martin, I also knew Roberta Martin and would go to her house as well. Of course, I knew James Cleveland and I even got to perform with Ray Charles. There's a funny story to that too. When James Cleveland was producing my albums, we used Ray Charles' studio one night to record. A tape of my singing was accidentally left there one night and Ray Charles came across it the next day and listened to it. He wanted to know who the singer on the tape was, and he was told that it was Sarah Jordan Powell. A few years later, Ray Charles was to play and sing at a Christmas Concert in Germany. Originally, Aretha Franklin was to accompany him, but she was not available. An agent overheard and suggested me, and Ray Charles agreed since he'd heard me via that tape which was left in his office years ago.

Do you have any plans to release any new material?

Yes. I am working on a project right now as a matter of fact. I expect it to be complete in about six months.

I have personally found that some younger audiences are really interested in the older gospel, especially when it comes to preserving it. What do you think about that?

Do you have any sage words of advice or tips after traveling the Gospel Highway for nearly 50 years?