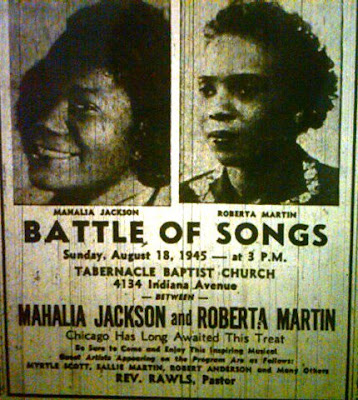 This feature comes to us from our good friend, DJ and gospel music historian in Chi-town, Bob Marovich (I think the word "Professor" should be amended to the beginning of his name, what do you think?). Recently, Bob came upon a piece of history and posted it to his Facebook profile. Dated Sunday, August 18, 1945 (though Bob notes it's a typo and the concert actually took place in 1946), the concert bill announces a "BATTLE OF SONGS" between Mahalia Jackson and Roberta Martin. What a battle! Oh, to have a time machine and go back nearly 65 years ago to witness what was surely a GRAND time!

With this "Battle", it's fun to imagine standing on one side of the church, Mahalia and her crew saying "Bring it on!", to which Roberta and her crew of Norsalus McKissick, Sadie Durrah, Eugene Smith, Willie Webb, Bessie Folk and Delois Barrett would reply, decked in their trademark robes with "Oh, it's already been brought, in Jesus' name!"

I think the real winners were the audience. Witnessing Mahalia and Roberta on the same stage? Mercy! Call the ushers and get the funeral home fans, quickly!
Posted by JM at 6/04/2011 12:15:00 AM 2 comments