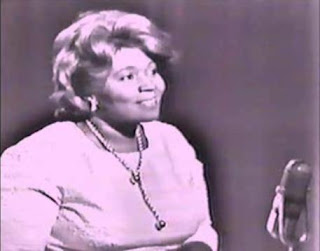 Sad news to report from Chicago. Earlier today, the Golden Era Gospel Blog learned about the passing of gospel legend, Delois Barrett Campbell. She was 85 years old. Delois was born March 12, 1926 in Chicago, IL. In 1943, she became one of the first female members of the Roberta Martin Singers, and also went on to record with her sisters, Billie and Rhodessa as the Barrett Sisters. In 1982, Delois and her sisters appeared in "Say Amen, Somebody", marking a highlight in her career. In later years, Delois would travel internationally to sing for audiences. In recent years, Delois was confined to a wheelchair, and started to lose her voice as her health declined.