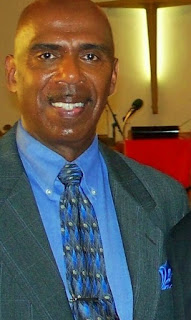 The following introduction was taken from the WNAP-AM website.

Linwood is a native Philadelphian and got his first taste of Gospel music as a teenager, while singing with the Savoy Singers. He began broadcasting in 1965 on WDAS in Philly. He was trained and mentored by the legendary Louise Williams. He left broadcasting in 1970 and found a church home, the New Gethsemane Baptist Church in South Philadelphia. There he organized the Youth Community Choir and organized the Willing Workers. In 1972 he was asked to co-host a black Gospel TV Show “Deep River” on Channel 29. This hour long show featured local artists and ministers.
In 1982 he was persuaded to return to radio by Basil Callamore who started a daily show, Gospel Highway on WYIS, Linwood came on board in the mornings. In 1989, the Pennsylvania Historical Society presented him with the Martin Luther Medal of Freedom, for his program Great Moments in Gospel. For several years Linwood has given lectures at colleges and universities on the history of Gospel Music. In May 2001, Emmy Award Producers, Jim Brown and Sam Pollard included Linwood in their 4 part series American Roots Music. The documentary was aired nationwide on PBS. He still conducts in depth interviews with pioneer and current artists and is an aid record collector with thousands of recordings dating back to the 20’s.

How and when did you get started in the radio hosting business?

Linwood Heath:I started in radio in the mid 60's when Philly announcer Louise Williams, who managed a group I was singing with, invited me to do internship at her station. Just putting on records and opening mail.


I know that you're primarily vested in the vintage traditional gospel from the Golden Era. How did you get interested in that particular spectrum of gospel music?

Linwood Heath:I was interested in the traditional music because that's what was popular at that time and the music she played, especially quartets. Also it gave me an opportunity to meet and make friends with the artists from the golden era.

How have you noticed the gospel industry change since your beginnings?

Linwood Heath:The industry has changed greatly since I became involved. Some good, as the artists are more aware of the business aspect of their ministry. On the other side, whereas there was a time when the concert-goer was able to shake hands with the artist and perhaps get an autograph.Today the concerts are so well attended that the artist can't reach out to the audience, and afterwards they're gone. Maybe if you attend their seminary, you'll get a chance to meet them.

Your playlist consists of songs not normally heard on many major black gospel stations from artists such as The Caravans, The Ward Singers, and The Blind Boys of Alabama. Do you have any speculation as to why these other radio stations don't have a playlist as varied as yours?

Linwood Heath:It appears that marketing targets the demographics from 18-35 years old.Our station does not have to follow the path of other stations. We play gospel because we feel gospel. We're not controlled by someone in another part of the country. We play current music as well as the older gospel. My show on Sundays, Precious Memories, only features music from the 20's thru the 80's. However on Saturday mornings I do a mixture. Perhaps the other stations don't have the library that we have to reach back.

What steps do you think are necessary to keep and raise awareness about Golden Era Gospel?

Linwood Heath:It would be nice if those 24hr stations would devote at least an hour to the golden era of gospel because there is a market.

Lately, we've been hearing a lot about H.R. 848 and how it is supposed to be a danger to black owned stations nationwide. What do you know about the bill and what ramifications do you believe it will have on black radio if it is passed?

Linwood Heath:I don't personally think that bill H.R. 848 will go through, it's too complicated. We already fill out BMI and ASCAP forms, what more do they want? If we're not careful we'll end up as we did back in the 40's with just church broadcasts.


In addition to radio announcing, I know that you have extended onto the internet with a YouTube page containing some pretty rare and cool stuff. Can you tell about what you've been up to?

Linwood Heath:I started on youtube because I'm selling my albums on ebay and wanted to share some rare recordings and videos with others. I find it brings back some memories to some and awareness to those who perhaps weren't aware of these recordings. it's been a real blessing to me but it can be time consuming and that I don't have much of anymore.
Posted by JM at 9/28/2009 01:51:00 PM