Happy Birthday to the Father of Gospel Music, Rev. Thomas A. Dorsey 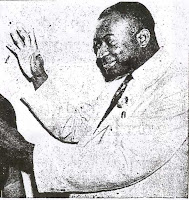 On July 1, 1899 in Villa Rica, Georgia, Thomas Andrew Dorsey was born. Over the next 93 years, Dorsey would set forth a path that would take him from being a top blues artist in the 1920s and 1930s known as "Georgia Tom", to one of the most prolific writers of gospel music. While Rev. Dorsey's songwriting career was at its peak from the 1930s to the 1950s, Rev. Dorsey influenced generations of gospel singers, and that influence still resonates today in new artists and songwriters such as Marvin Sapp, whose hit composition, "Never Would Have Made It", took churches by storm during 2007 and beyond in a similar fashion to Rev. Dorsey's "Precious Lord, Take My Hand" in the 1930s. Other songs like "Peace in the Valley", "I Was Standing by the Bedside of a Neighbor (If You See My Savior Tell Him That You Saw Me)" "When The Gates Swing Open" and "I Don't Know Why" are still in regular rotation in churches worldwide and can be found in many a modern hymnal.

No doubt about it, Rev. Dorsey left behind a rich legacy.

Check out some of these videos featuring songs by Rev. Dorsey, and footage of Rev. Dorsey himself.