Documentary released about the life of Albertina Walker 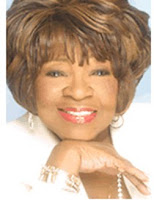 Last week at this year's annual Gospel Music Workshop of America (GMWA) convention, it was announced that a 1 hour long documentary about the life of Albertina Walker had been completed and released. I have confirmed with Ms. Walker's assistant, Eric Peterson, that the documentary will be available for purchase by the public via Ms. Walker's official website, www.albertinawalker.com, in a few weeks. When asked if the documentary will be aired on TV, I was told that there were negotiations going on concerning the broadcast of the documentary. A documentary about The Caravans is also set to be released at a later date. I will post more about that as more information becomes available.
Posted by JM at 8/05/2010 11:15:00 AM 0 comments