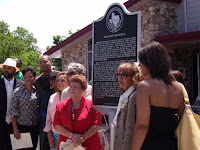 A crowd gathered in front of the Louis Robey Professional Building on Lyons Avenue in Houston's Fifth Ward on April 16 for the unveiling of a marker honoring Don Robey and his Peacock label. The program began promptly at noon with a welcome and introduction of guests by James H. Ford Jr., a storyteller and English professor at Houston Community College who was one of the forces behind making today's dedication a reality. Speakers included Music Historian Dr. Roger Wood, also from Houston Community College, former Peacock recording artist Texas Johnny Brown, Rap-A-Lot records founder J. Prince, and Debra Blacklock-Sloan of the Harris County Historical Commission. A host of Don Robey's relatives were on hand including his daughter, Dr. DonaLeah Robey Fields and his youngest sister. Proclamations and Resolutions were presented from Congresswoman Sheila Jackson Lee, Senator Kay Bailey Hutchinson, Houston Mayor Annise Parker, Texas Governor Rick Perry and Lt. Governor David Dewhurst. Special attendees were recognized, including Dr. Carlos Handy, Department Head Chair of the Physics department at Texas Southern University. Dr. Handy is the nephew of W.C. Handy, known as the "father of blues."

After the speakers had spoken and the special guests were recognized, it was time to unveil the marker. With Don Robey's descendants and relatives standing nearby, the cover was taken off and the marker was revealed to the crowd, culminating a project decades in the making honoring one of Houston's native sons who made his mark on gospel, r&b and blues music.
Posted by JM at 4/16/2011 07:08:00 PM 0 comments

Sad news from Mississippi. The historic and internationally acclaimed Malaco Records in Jackson, Mississippi was destroyed by a tornado which ravaged the area on Friday, April 15. Two of the three buildings on the compound were destroyed. Just 3 years ago, Malaco was honored with a marker from the state of Mississippi, recognizing the 49 year old company as a landmark on the Mississippi Blues Trail.

In 1986, Malaco purchased the gospel division of Savoy Records, which during the 40s through the 80s was the home of many Golden Era Gospel artists such as Dorothy Love Coates, James Cleveland, the Roberta Martin Singers, the Caravans, and the Davis Sisters just to name a few.

Here is video of the tornado responsible for the destruction.