O Johneron Davis, Where Art Thou?

Just about everyone who has an interest in Golden Era Gospel knows about Albertina, Shirley, Bessie, Cassietta, Delores, Dorothy and James (Cleveland and Herndon) as some of the best known members of The Caravans. Yet, there's one member that's rarely talked about and little is known about her. Her name was Johneron Davis. 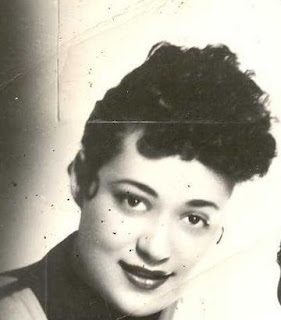 From 1953 to 1962, Davis was a member of The Caravans. Davis sang a distinctive soprano register which could easily be picked out in the background vocals. To my knowledge, Davis only led or co-led two songs while recording with The Caravans. Those songs were "In His Name" which was recorded in 1960, and "Remember Me" from her last recording session with the group 1962 in which she duets with Albertina Walker as they sing the "Father, I stretch my hands to thee" portion of the song. Despite her nine years with the group, little is known about Davis such as where and when she was born, what other groups (if any) she sang with, how she became a member of the group, and her life after she left the group in 1962. This post is probably more of a plea than anything else, but I would like some help in finding out about Davis's life. I'll do my part, but I'll need some help. If you have any information about her, please contact me by leaving a message in the comments section of this post.