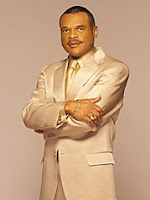 Homegoing Celebrations for
Bishop Walter L. Hawkins
is as follows:

Must Use "Love Center Ministries, Inc"

*We are requesting everyone to
wear "CREAM" for Wednesday Morning Service!


Ripon, CA - Walter Hawkins, the Grammy Award-winning gospel singer/composer and pastor of Oakland's Love Center Church, died @ 2:48 PST July 11th at his home in Ripon. For the last two years, Hawkins has been battling pancreatic cancer. He was 61 years old.

During the 1970s, Walter Hawkins personified a new wave of gospel artists such as his brother Edwin Hawkins of "Oh Happy Day" fame, and Andrae Crouch who brought a youthful contemporary vibe to gospel music. Hawkins cut a series of best-selling "Love Alive" LPs that remain gospel classics to this day. Hawkins' songs have been recorded by a who's who in music ranging from Aretha Franklin and "American Idol" champ Ruben Studdard to Vickie Winans and M.C. Hammer.

"The impact that Walter Hawkins had on gospel music was so profound and far-reaching that it is now, and forever shall be, part of gospel's DNA," says gospel music historian, Bob Marovich, who edits The Black Gospel Blog.

Hawkins was born May 18, 1949 in Oakland, CA. Reared in the Church of God in Christ (COGIC) denomination, Hawkins became a master pianist as well as a dynamic singer with an operatic vocal range. His brother, Edwin, had already made a name for himself in 1969 when "Oh Happy Day" became an international hit. While studying for his master's of divinity degree from the University of California at Berkeley, Hawkins recorded his first LP "Do Your Best" in 1972. An October 1972 Billboard magazine reviewer wrote, "Walter Hawkins is a pianist of enviable accomplishments while his vocal prowess is in no way disputable. He's gathered around him an exceptional crew of sidemen and vocalists and the total effect is completely invigorating."

The following year, Hawkins became a pastor and founded the Love Center Church in East Oakland. After forming the Love Center Choir, he recorded their first album as a church family. He used $1,800 he borrowed from his mother-in-law to complete the project. It was the first in a series of LPs named "Love Alive" and it debuted on Light Records in 1975. The album featured his then-wife, Tramaine, leading "Changed" and "Goin' Up Yonder" which became two of the biggest gospel songs of the decade. A runaway smash, the "Love Alive" album sold a staggering 300,000 copies. The five "Love Alive" LPs featured classic gospel songs such as "I Love the Lord," "Be Grateful," "I'm Goin' Away," "Thank You, Lord" and "Until, I Found the Lord."

Although, he had earned nine Grammy Award nominations during his career, Hawkins only won one for his performance on "The Lord's Prayer" LP in 1980 (he also performed on the televised Grammy Awards ceremony that year). In 1990, Hawkins released "Love Alive III" which became the biggest seller of the "Love Alive" album series. The radio favorites were "There's A War Going On", " I Love You, Lord" and "He'll Bring You Out." The LP spent 34 weeks at #1 on the Billboard gospel album sales chart during the almost 100 weeks it spent on the survey. The album went on to sell over a million copies. The 1993 "Love Alive IV" also peaked at #1 on the album sales chart and spent a year on the survey. In between projects, Hawkins was ordained a Bishop in October 1992.

As elder statesmen in gospel, Hawkins become a favorite for cameo appearances in recent years. The Mississippi Mass Choir had a hit with him on "Hold, On, Soldier" in 1993 and Donald Lawrence & the TriCity Singers watched him steal the show on "Seasons" from their "Go Get Your Life Back" CD in 2002. The 2001 "Love Alive V" CD featured a huge comeback hit for Hawkins with the ballad, "Marvelous." Hawkins' final solo CD "A Song in My Heart" won a Stellar Award for Traditional Gospel Album of the Year in 2006. He was inducted into the Christian Music Hall of Fame in 2007.

After surgery for pancreatic cancer in late 2008, the Hawkins Family (Walter, Edwin, Tramaine, and sister, Lynette) staged a successful, multi-city Hawkins Family reunion concert tour. At the time of his death, Hawkins was planning a new "Love Alive" CD concert recording for this fall.

Hawkins relished being a pastor as much as he enjoyed singing. "Early on I thought my ministry and my music were apart from each other. But now I see they work hand-in-hand," he once said. "I can go a lot of places with my music that I can't go as a pastor and vice versa. The purpose of both is getting the message out to people. I've had some material blessings and it's okay to have them, but to be blessed with peace of mind and joy in your life, that's when you will be truly fulfilled."

Hawkins is survived by his two children, Walter "Jamie" and Trystan Hawkins; daughter-in-law, Myiia Hawkins; two grandchildren Jamie-Daniel and Jahve; a host of nieces and nephews; the Love Center Church family and Choir; and his siblings Carol, Feddie, Edwin, Daniel, and Lynette.