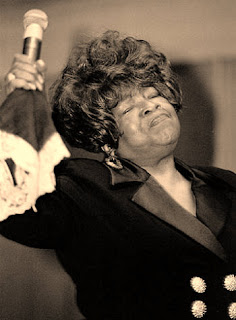 With a heavy heart, The Golden Era Gospel Blog has sad news to report from Chicago this morning from Rev. Stanley Keeble by way of Ronald Greer and via the Yolanda Adams Morning Show. The legendary Albertina Walker has died at age 81. Ms. Walker passed around 4:30am Friday morning from respiratory problems. Ms. Walker's career spanned nearly six decades. In the late 1940s, Ms. Walker joined Robert Anderson's gospel caravan, later renamed Robert Anderson and The Caravans. In 1952, Anderson left the group, and Ms. Walker became the leader of the group. As leader of The Caravans, Ms. Walker took a more laid back role and helped to launch the solo careers of Caravans alumni such as James Cleveland, Bessie Griffin, Cassietta George, Loleatta Holleway, Shirley Caesar, Inez Andrews and Dorothy Norwood. Ms. Walker released her first solo album in the mid 1960s, but continued to stay as the lead of The Caravans until 1976. During a period spanning from the late 1970s to the late 1990s, Ms. Walker enjoyed a string of hits such as "I Can Go to God In Prayer", "I've Got a Feeling", "Hallelujah, This is The Way to Sing Praises to our God", and "I'm Still Here." In 2006, Ms. Walker and The Caravans (Inez Andrews, Dorothy Norwood and Delores Washington) reunited to record the "Paved the Way" album for Malaco records, which was the first all new album by The Caravans to be released in 30 years. A second album with The Caravans titled "My Soul Says Yes", was set to be released later this year.

Commentary:
If time has taught us anything within the Golden Era Gospel circle, it is that some groups from that era cease to operate without their leader (with exception to many quartets). For example, when Roberta Martin died in 1969, The Roberta Martin Singers tried to soldier on without their leader, but did not make it past 1971. If The Caravans should cease to sing or record after Ms. Walker's death, or if they shall continue strongly with another member taking the reins in the absence of Ms. Walker, we can still say Thank You, Lord for the ministry of Albertina Walker, and Thank You, Lord for the ministry The Caravans, from their days with Robert Anderson until this present time.
Posted by JM at 10/08/2010 07:11:00 AM 0 comments