Congrats to Mavis Staples on her Grammy win! 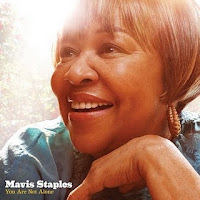 It's been a long time coming, but after over 60 years in the music business, Mavis Staples has won her first ever Grammy. Staples took home the best Americana album for her latest release, "You Are Not Alone" during the pre-telecast portion of the Grammys. Pop & Hiss, the L.A. Times Music Blog, blogged Staples' win in real time. During her acceptance speech Staples thanked her Heavenly Father and her biological father, the late Roebuck "Pops" Staples.

"Give the honor to God and to my father, Pops Staples. It's because of you, Pops, that I stand here today. I tell you, you laid the foundation, and I am still working on the building ..."

At the end of her speech, Staples invoked the late Albertina Walker.

"You will not see the last of me. God is not through with me."