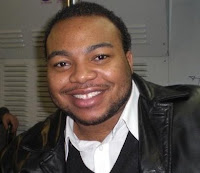 Emmanuel "Manny" Jones is a 23 year old fellow Golden Era Gospel fan from NYC. I initially met through his YouTube uploads. Under the name MannyManFresh7, he has uploaded fanpost videos by artists such as The Caravans, The Roberta Martin Singers, and Jessy Dixon. Manny agreed to talk with me about his love and appreciation of Golden Era Gospel Music.

TGEGB: So Manny, when did you become interested in Golden Era Gospel?

TGEGB: Do you like today's gospel music or are you purely "old school"?

Manny: I have to say I like about a handful of the gospel music that's coming out today. But I'm old school at heart. With the old school music you get a message you can't ignore, today's music it's so hard understand what the artist is even saying. More beat & music than the words!

TGEGB: Who are your favorite golden gospel artists?

TGEGB: Who is your favorite golden era gospel artist of all time?

Manny: Hands down The Caravans

TGEGB: If you could sing with any golden era gospel group, which one would it be?

Manny: This is a hard question. Of course I would love to sing with The Caravans, but I always wanted to sing with the RMS to be under the late Roberta Martin's teaching.

TGEGB: Some people have had troubles with their gospel uploads on YouTube. Have you had any troubles?

Manny: Actually yes I have. This one particular character I'm not gonna mention his name. BUT his late aunt was a former Caravans member, so he ALLEGEDLY owns the copyrights to his aunts songs SHE WROTE. But this character goes as far as disputing anything with his aunt's voice on it if it's not uploaded from him. All he is doing is TRASHING his aunt's name. She's gonna have a tarnished reputation he keeps getting our videos taken down!

TGEGB: It's no secret that you loved the late Albertina Walker. Some groups like The Roberta Martin Singers and The Clara Ward Singers either declined in popularity after their leaders died, or stopped recording altogether. What do you think The Caravans will do now that Albertina is gone?

Manny: I do believe The Caravans can go on without Tina. See with the RMS, I believe at that time things were different. You know by the time she passed, groups of the golden era were fading out as a new brand style of gospel music was coming out. I do believe some wanted to branch out on their own too. In today's time it's different. Dorothy Norwood & Shirley, Inez they are all household names. So together, that would be even great!
Posted by JM at 11/18/2010 01:50:00 PM 0 comments