Hey, Houston! Want to see "Rejoice and Shout" for free? Here's your chance!

"Rejoice and Shout" is Magnolia Pictures' newest release, scheduled to be released to select theaters nationwide starting Friday, June 3, 2011 This film covers traditional gospel music and the Golden Era of Gospel. Expect to see performances by Clara Ward, the Caravans, the Blind Boys of Mississippi, the Dixie Hummingbirds and many more groups. If you are in the Houston area and want to see a free screening of this film on Thursday, June 2, 2011, please contact KTSU-FM. KTSU has a few passes available to see "Rejoice and Shout" at a local Houston movie theater. These passes are first come, first serve. So, make haste and get your pass ASAP! Passes can be picked up from KTSU studios on the campus of Texas Southern University during business hours beginning on Tuesday, May 31 through Thursday, June 2 from 9am-5pm. For more info, please call KTSU-FM at 713-313-7591.
Posted by JM at 5/29/2011 09:15:00 PM 0 comments 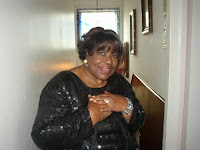 You can read an October 2009 interview that the Golden Era Gospel Blog did with Ms. Price-Williams here: http://goldeneragospel.blogspot.com/2009/10/golden-era-gospel-blog-interviews.html

The Golden Era Gospel Blog didn't make it to the 2011 Black Weblog Awards this time, but some friends did!

I'm pleased to find out that two friends of mine have made on the ballot this year, and I'm encouraging you to support them.

The first friend is Leah LaRue, proprietor of Order in the Church. Leah's blog is on the ballot FOUR times. Her excellent blog was nominated in the categories of Best Faith Based Blog, Best Writing in a Blog, Blog of the Year and Blog to Watch!

Kimatni Rawlins' website, Automotive Rhythms, is in the running for Best Automotive Blog. His website is top notch. One visit will have you pining for a Porsche, a Benz or any other one of the fine cars he reviews.

Congrats to Leah and Kimatni! The Golden Era Gospel Blog stands behind the two of you.

Bob Marovich will celebrate 10 years of Gospel Memories at 10am tomorrow morning on 88.7 WLUW-FM, Chicago. If you're in Chicago, tune in. If you're not in Chicago, you can listen online at wluw.org

In the United States, Mother's Day is almost upon us. TV, radio, and the internet are filled with ads beckoning consumers to go out and buy gifts and flowers for their dear mother. Gospel music is not immune to this trend of acknowledging mother. In traditional gospel circles, it's not uncommon to hear songs with references to mom, mama, mother, or mama dear with songs like "I Can Still Hear Mama Praying", "I Can See Everyone's Mother But Mine", "Thank God for Mama" and "Mama Prayed for Me". During the Golden Era, mention of mother was frequently executed in gospel songs. Whether listening to the Caravans, the Soul Stirrers, the Bradford Singers, the Roberta Martin Singers, or the Mighty Clouds of Joy, you'd be bound to hear a reference to mother sooner or later.

Some gospel music historians regard this as a "dirty trick" used to rile up emotions among the congregation during a concert or a song when the congregational response is not up to par with the expectation of the singer. Dirty or not, the truth is that this tactic usually worked. Traditional African-American preachers of the extemporaneous style have been known to use this technique, as well. Even today you'll hear a closing line in a sermon that says something to the effect of "somebody here's got a mother waiting for them on the other side!", usually followed by shouting from the congregation.

In music, you can hear this technique in a great number of gospel songs both modern and from the Golden Era. For this short n' sweet entry, we'll focus on the latter. For example, Roberta Martin's composition, "God's Amazing Grace", begins with the words "I was young, but I recall singing songs was mother's joy." Further along in the song, the listener will find out that the narrator's mother is no longer on this earth with the line "Mother was so good to me." In Alex Bradford's "Too Close to Heaven", the singer states "I want to see my old mother again, hallelujah!" However, the most famous of the Golden Era Gospel songs to execute the theme of the mother who has passed away has to be "Leave You In the Hands of the Lord" by Archie Brownlee and the Blind Boys of Mississippi. In that song, the subject of the mother passing away makes up the backbone of the song.

This is an interesting subject and I am sure it could foster a lengthy discussion. However, I hope this little blurb will bring this tidbit of information to your attention. Listen to the songs I pointed out above. If you don't believe there are that many gospel songs dedicated to "mama", I dare you to turn on radio on Mother's Day and listen to a gospel station. There's no doubt you'll hear a song or two (or three plus) about mother, mama, mama dearest, or mom coming from your speakers.
Posted by JM at 5/06/2011 12:46:00 AM 1 comments

If Marion Williams was Packin' Up, Fantasia's Packin' On. According to rollingout.com, Fantasia has been told to gain 30-45 pounds to prepare to play the role of Mahalia Jackson in the upcoming biopic about the Golden Era Gospel singer.

On a side note, with this demand for Fantasia to gain weight, I hope that the producers of the film will keep things authentic. While Mahalia was a large woman during the height of her career, she lost quite a bit of weight towards the end of her career as she battled her physical ailments.
Posted by JM at 5/04/2011 01:05:00 PM 0 comments

There's still time to nominate the Golden Era Gospel Blog for the 2011 BWAs!

There's still time to nominate the blog for the 2011 Black Weblog Awards. It's super easy to do and won't take you long.

Visit this link: https://blackweblogawards.wufoo.com/forms/z7x3k7/
Then, place the blog URL (http://goldeneragospel.blogspot.com/) in the categories of:
Best Culture Blog
Best Faith Based Blog
Best Music Blog
Blog to Watch
Best Writing in a Blog

That's all it takes. If you've already nominated the Blog, THANK YOU! If not, go ahead and nominate it now. Don't wait until it's too late. The deadline is May 7. Tell your friends and family to nominate the blog, too. Spread the word!

The 2011 New Orleans Jazz Fest is paying tribute to NOLA's native daughter, Mahalia Jackson. Though Mahalia was perhaps best known for "running" the Chicago gospel scene alongside Roberta Martin in the 40s-60s, New Orleans was her birthplace and place of residence until 1927. Mahalia made her one and only appearance at the New Orleans Jazz Fest in April 1970 with another New Orleans music great, Louis Armstrong. As New Orleans prepares to celebrate Mahalia Jackson's 100th birthday in October, a few tributes have been planned to honor Mahalia. The first tribute took place on April 30 and featured a set by R&B singer Fantasia, who will portray Mahalia in a biopic to be released later this year. Another tribute is scheduled for Friday evening, May 6th from 5:40pm to 6:40pm in the Gospel Tent at the Jazz Fest.