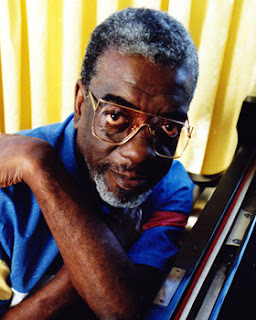 December 5, 2011 marks what would have been James Cleveland's 80th birthday. One can only imagine what the gospel field might have been like today had he lived until now.

Here's a few songs to check out from his 40 year recording career, including his recording debut in 1951 with the Gospelaires as pianist and vocalist, and his last composition and recording in 1990 with the LA Gospel Messengers.

I've broken the list up into different phases of his recording career so you can hear how his style of arranging changed and adapted over the years. There's a 3-6 year gap between each song, and 2-3 songs per decade with exception to the 1990s.

1951 "The Lifeboat is Coming" by the Gospelaires

1966 "Christ the Redeemer" with the Walter Arties Chorale

1969 "Over My Head" with the Southern California Community Choir

1973 "Lord, Help Me to Hold Out" with the Harold Smith Majestics

1979 "God Is" with the Southern California Community Choir

1990 "Always" with the LA Gospel Messengers

Happy Birthday, "King James!" We're sure you're having one heck of a celebration up in Glory with Prof. Dorsey, Mahalia, Roberta, Albertina, Clara, Sallie, Alex, Jessy, Gene, and the rest of your colleagues and mentors.
Posted by JM at 12/04/2011 09:41:00 PM 0 comments