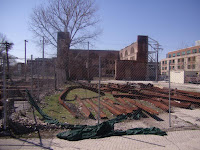 Pilgrim Baptist Church was gutted by fire in 2006. The church served as the birthplace of gospel music and was where Thomas A. Dorsey and James Cleveland among others, perfected their craft. Shortly after the fire, former Illinois Governor Rod Blagojevich promised to allocate $1 million to rebuild the landmark. Blagojevich failed to live up to that promise and now, lawyers for Pilgrim Baptist Church have filed a lawsuit against the Illinois Department of Commerce and Economic Development to give the money that was promised four years ago.