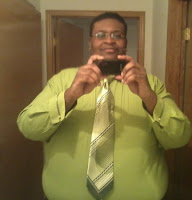 Some folks are drawn to Golden Era Gospel because they enjoy the sound and the message. Some also enjoy it because it's in their blood. Timothy Williams is one of those who has Golden Era Gospel in his blood, and like the old song says, it's flowing like a river.

TGEGB: How did you come to like Golden Era Gospel Music?

Timothy: Well between my grandparents being from the south and on the (gospel) circuit themselves and my late father living in Chicago at one time, those elements brought that love for old school gospel to my attention very early in life.

TGEGB: What groups did your grandparents sing with?

Timothy: My grandmother sang with a group out of Hattiesburg, Mississippi called The Zionettes. The group consisted of her brother and first cousins. They had a hit that was big throughout the Southern region called "Where Is the Road That Leads on Home". Then my grandfather sang with the Sunset Travelers for about 5-6yrs. My grandparents met at a program in Memphis, Tennessee. When they married they formed a duo together and toured with Rev. Willie Morganfeild and The Consolers as well as the Sensational Nightingales.

TGEGB: Did your grandparents ever record?

Timothy: Yes, for a small label out of Cleveland, Ohio. I forgot the label's name, but their manager's name was Calvin Brown. He also acted as their produced and was Rev. Morganfield's manager as well.

TGEGB: Are there any more family roots in Golden Era Gospel?

Timothy: Yes. My grandmother's brother sang with a group named the Florida Robbins Singers. My father loved good quartets and the squalling preachers of the day. He saw a lot of those groups when he lived in Chicago. He would tell me many stories about the many programs he went to at Chicago's DuSable High School auditorium. He loved The Caravans Dorothy Love Coates and The Harmonettes, but The Davis Sisters were his favorite above all of the other female singers.

TGEGB: Who are your favorite Golden Era Gospel singers?

Timothy: I am very versatile when it comes to it. I like the soloists like Brother Joe May, Bessie Griffin and so on. I really liked Edna Gallmon Cooke, she knew her Bible. I also love the quartets. The Swan Silvertones are my favorite of the quartets. Oh, and Dixie Hummingbirds as well, can't forget them. I was raised on them and Soul Stirrers. But of the female groups, I love the Clara Ward Singers, both sets of them! I fell in love with the Meditation Singers and the Davis Sisters because they were some squalling women, as were the Caravans. When I want to hear sweet harmonies, I listen to the Barrett Sisters.

TGEGB: Sounds like you have the love of music throughout. Do you play any instruments or sing?

Timothy: I sing in a group with my family named The Newson Family Singers led by my grandfather. I play drums in the group. As you can see, I'm very proud of my musical roots.

Timothy: Believe it or not I would like to be apart of the mixed groups of that day
like the Roberta Martin Singers, the Raymond Raspberry Singers, the Gospel Clefs, Herman Stevens' group, or just a soloist by myself. I know I would be very fiery and every song would be a toe tapper lol! You know I'm shouter, I likes to move LOL!