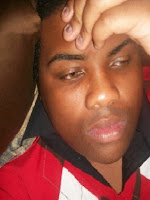 TGEGB: When did you start listening to Golden Era Gospel Music?

I would say that question has two answers to it! Officially, I started being a fan when I was 18, and got my first computer and was just listening to music, when I ran into a song by Mahalia Jackson from a movie I had seen when I was younger, called Imitation of Life,the song being of course, "Troubles Of The World". So I started listening more to her music, and that lead me to listen to others, such as The Caravans, and The Original Gospel Harmonettes. And I would also say unofficially, I been listening to it my whole life! A lot of the songs that are sung by the groups, are songs I heard growing up here in North Carolina, where EVERYONE it seems like sings gospel! I remember hearing and singing songs like "Heavy Load" (Edna Gallmon Cooke) and "When The Gates Swing Open" (Clara Ward), and many others.

TGEGB: Who are your favorite artists?

TGEGB: Who is your favorite golden era gospel artist(s) of all time?

I would say that would be Dorothy Love Coates and The Original Gospel Harmonettes! Their music had a passion and intensity that few could match! Oh and add, The Davis Sisters, The Meditation Singers, The Angelics, And The Roberta Martin Singers.

TGEGB: Tell us a little bit about your YouTube videos.

My videos are very much a mixture of different types of Golden Age Gospel. Posted, I have some very early material from people such as Arizona Dranes, and Clara Ghoulston (The Georgia Peach). I also have several WWII era sides from Sallie Martin and Her Singers of Joy, as well as The Gospel Harmoneers, later to become The Original Gospel Harmonettes. There is also a great amount of music from The Caravans, who rank with the Gospel Harmonettes as being my favorite group, lol. Songs such as their first cut, "Think Of His Goodness" in 1952, as well as songs they did over the years, such as "Steal Away", "Lord Keep Me Day by Day", and so forth. I also wanted to show case some other music that others may not have heard before, such as from the Group Sweet Honey In The Rock. I also have music posted by The Clara Ward Singers, The Golden Harps, The Brewsteraires, Edna Gallmon Cooke, The Original Gospel Harmonettes, and so forth.

TGEGB: Do you sing or lead any Golden Era Gospel songs in a group or choir?

I actually do, I sing with several groups, as I come from a hot bed of Gospel Singing! I sing with Steve Wilson And The Love Center Choir, The Hood Seminary Gospel Choir, and The Anointed Voices. One song in particular I am working on getting into the mix of our different types of songs, is Kitty Parham's "I"m Looking To Jesus"!

I would say it would be with out a shadow of a doubt, the song "I'm Sealed" by the Original Gospel Harmonettes!

TGEGB: Is singing in your blood? Any particular Gospel artist have influence on your on personal style?

Why yes it is actually! My grandmother, and her sisters, and brothers, sung together as The Voices of Inspiration back in the 70s into the 90s. My great Grandmother, Etta Ree Allison Partee is also another singer, who at the age of 85 is still singing around North Carolina. And I would dare say the one gospel artist whom has influenced me the most, would be the late great Albertina Walker. I have a husky tenor voice, that I have musically without knowing adapted to Tina's singing style! Also the level of sincerity that she displayed has and will always be amazing to me! Will never be another like her!