Golden Era Literature: A book about the Roberta Martin Singers is in the works by a Texas author 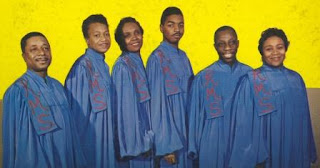 
Ronald Greer of Bay City, TX is writing a book about the Roberta Martin Singers, pictured at right. This really piqued my interest as the group is my favorite Golden Era group. I was able to ask Mr. Greer a few questions about his book and how he became interested in taking on this project.

How did you first become interested in the Roberta Martin Singers?

When did you decide to write a book about the group?

After my association with Eugene "Gene" Smith began, we started talking and he began telling me about Roberta Martin and how the Roberta Martin Singers started. As time went on, I began to ask more and more questions, which prompted me to begin writing this information down. One day, Gene said to me that with all this knowledge that he had shared with me, that I ought to write a book about the Martin Singers. I thought about it and after also talking to former members, Bessie Folk, Archie Dennis, Delois Barrett Campbell and Little Lucy Smith; I felt that with the vast amount of info that I had collected over the years, a book about the group was completely in order. Now that I look back, I just wish I would have talked more with Roberta's husband, Jimmy Austin before his death. I still have on my list, to plan a conversation with Roberta Martin's son, Leonard "Sonny" Austin. There's nothing like getting the blessings on the immediate family.

How long has it taken you to do research for this book?

I have been researching the Roberta Martin Singers and their history since I met Eugene Smith, back in 1977. I would get the "bug" and then lose interest in writing. Get the bug again and once again, lose interest. I really became interested in the book after reading Evelyn Hardy's book about her travels with the Gospel Harmonettes. I then collected my thoughts and all my many notes I had written on sheets of paper and began to put them together.

What interesting things can readers expect to see in your book?

They, hopefully will see the significant contributions that Roberta Martin and her singers have made not only to gospel music, but to music in general. They will also get to see a countless amount of photos of singers: some of whom they just heard about. Example: Prof. Theodore R. Frye

When do you expect the book to hit the shelves?

I would like to see this book come out, in the month of February, 2011; just in time to celebrate Roberta's birthday. I would like to plan a big celebration; possibly in conjunction with the Roberta Martin Memorial Club of the Mt. Pisgah Bapt. Church and a book signing in Chicago and and in conjunction with the National Convention of Gospel Choirs and Choruses- of which Roberta Martin was their 1st National Supervisor of the Youth Department; the GMWA and various churches across the country where The Roberta Martin Singers traveled.

Mr. Greer can be contacted via e-mail at rgreer59@yahoo.com.

To end this message, here's a post from YouTube with the Roberta Martin Singers singing "Try Jesus".