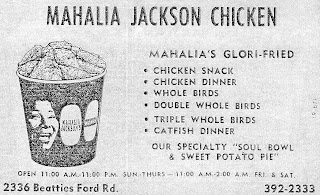 Mahalia Jackson is well known today for her singing, and even her involvement in the Civil Rights Movement. What many don't know is that she also lent her image and name to a chain of chicken restaurants in the late 1960s. In 1968, a chain of restaurants opened up named Mahalia Jackson's Glori-Fried Chicken. These restaurants were the brainchild of John Jay Hooker and his brother, Henry. The story begins in 1966. After seeing the success of Kentucky Fried Chicken, the Hooker brothers decided to apply the formula to their own chain of restaurants to give KFC a run for their money, as Wall Street was selling KFC at 40 times its earnings! John Jay Hooker contacted Sarah Colley Cannon, better known as Minnie Pearl of "Hee Haw" and asked her if she would want to appear as the spokeswoman for their new chicken restaurants. She agreed. A lab in Chicago developed a fried chicken recipe and their first location opened up in Nashville. Mahalia did as Minnie Pearl did and lent her image and name to the same company to open up a franchise of take-out chicken restaurants in primarily black neighborhoods in cities such as Jacksonville, Houston, Chicago, Detroit and Memphis.

The franchises were short lived. In 1969, the SEC announced an investigation into Hooker's franchises. Though no wrongdoing was found and Mahalia Jackson, Minnie Pearl, and Hooker were all cleared of wrongdoing, the investigation caused the stock to drop from a high of $40 a share to just 50 cents, and the company virtually liquidated, spelling the end of Mahalia Jackson's Glori-Fried Chicken.

While most locations closed in the 1970s, one located continued to operate until about 2008 in Nashville.